Vung Tao is a nice laid back town , you’ll notice straight away once you’ll arrive, consider to go in Vung tau around mid February, the atmosphere it’s very chill, I personally was there during the first week of Tết (Vietnamese New Year) and was bit crowded, it was an enjoyable stay anyway.

When you don’t plan it, then it’s right

When I decide to go to Vung Tau, it wasn’t in my plan , but I met Rim in Saigon, a Canadian girl who was going to have her internship in Vietnam, she kindly told me that this place was worth to check it, I booked a van the same day, paid around 110.000 Vietnam dong.
That was very cheap! you’ll see that almost everywhere in Vietnam is very cheap, from Food, beers and transport, if you spot the right places.

I booked the same day the hotel while I was in the van, it was a new hotel on booking.com, I didn’t care much, was pretty cheap like sleeping in the hostel, so I booked it.

On the way to get to Mihn hotel my phone died, lost my self, and so I started walking through the alleys, thank god that happened. While walking I discover this small Pagoda, Monks was living in there, I was amazed by their smile, so I stopped to take some pictures.

I had also the occasion to meet the head monk of the pagoda and share some words with her, I was wordless for the light she was spreading, and the joy she transfer me just only with the eyes.
They offered me food and warm cup of tea, while the kids were smiling to that foreign being there, I was floating with my mind looking around and thinking about how that place was giving me much peace.

Sometimes things are meant to be there, and need to happen right on that moment

Sometimes things are meant to be there, that day I was amazed multiple times how things combined with each other.

Arrived at the hotel, I met Sam, a 22 years old guy who is the manager of the hotel who works very hard to keep the hotel maintained well, I was amazed by his humbleness and kindness.

He offered to bring me around the city with his motorbike, I accepted and went for a drink.

The next day I got invited to a monk house for breakfast, so I was experiencing how a real Vietnamese breakfast is done, you surely get very full, the food was placed in the ground, while family and friends will be sitting around it.
You usually should wait the elders to start eating, but they was way much kind, so they let me start first.

It was all based on vegetables, carrots, spinach, beans, and rice wraps!

I wasn’t staying much in Vung Tau, so the next day Emily decided to take me to a tour around the town.
That same day I went around with the little monks, that was the most fun thing I’ve ever done in Vietnam, they don’t go to visit the city that much, and seeing a 13 years old monk driving a cool electric scooter, go to the gaming, it was the coolest thing I’ve ever seen! after we ate some pizzas all together, it was a blast, I later visit The Lighthouse and the Christ of Vung Tau.

This place was worth the visit, had much fun, and be glad to have met so many fantastic people, I will surely go back to Vung Tao. 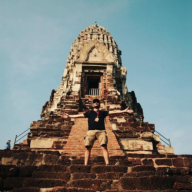 Follow on me instagram or support me by booking on booking.com receiving 25AUD! using my referral link